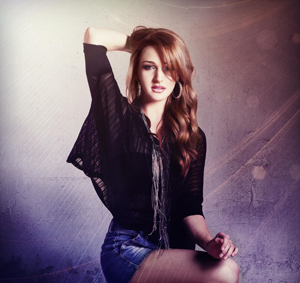 You haven’t been able to look at an iTunes chart for months now without seeing the likes of Lady Gaga, Katy Perry, and Adele sitting comfortably in the Top 10. At the same time radio stations are constantly blasting Britney Spears, Ke$ha, and Rihanna on high rotation. It’s safe to say that females are dominating music right now. Queue newcomer Victoria Duffield fresh off a signing to Warner Music Canada from Abbotsford, British Columbia. Younger fans may know her as a Top 6 finalist on the third season of YTV’s The Next Star, while others may recognize her from one of the over 30 movies and television shows she has appeared in. That’s right – she’s a singer as well as an actress, and to no one’s surprise Victoria is also passionate about dance including professionally training in jazz, hip-hop, and ballet. Victoria even co-wrote her debut single “Shut Up and Dance” with Ryan Stewart (Carly Rae Jepsen, Suzie McNeil) which is now spinning on stations across the country. Live in Limbo had a chance to catch up with Victoria Duffield when she was in Toronto to chat about the new song and what’s next for the young performer.

Jaimie Milburn (JM): Your first single “Shut Up and Dance” just hit radio in the past few weeks – what have these weeks been like for you?

Victoria Duffield (VD): Well it just hit radio about a week ago so it’s been a really exciting week for me, for sure.

JM: What was it like working on the single?

VD: It was really exciting working on this single. I worked with someone in Vancouver, Ryan Stewart. We worked really well together and came up with a great dance track which was really important to me.

JM: You had a chance to record a bit with The Next Star, so I’m just wondering what the process was like this time around for you.

VD: I had done some other recording and things before I did that reality show so I was pretty used to the process already. I was familiar with the vocal booths and writing the songs but each song is always a different experience.

JM: You’ve had a chance to co-write with some great writers, what has that been like?

VD: It’s just been such a great opportunity because they’re so practiced and I got to learn different writing techniques. It’s amazing how many different techniques there are and how people work from starting with melody or theme or lyrics, or starting with a beat. It’s been great picking up tips from everybody to make the writing process faster, easier, and better each time.

JM: Where do you find inspiration to write your songs?

JM: Who do you consider your musical icons, or whose career would you like to follow in the footsteps of?
VD: There’s lots of people I’ve looked up to growing up. Obviously when I was young Britney Spears was a big one that I looked up to with the singing and the dancing, putting on that whole entertaining package. There were so many great dance/pop songs from great artists when I was growing up. Beyonce is another one that does a great job with the dance too. There’s so many to look up to!

JM: What does a typical day look like in the life of Victoria Duffield?

VD: A typical day in the life of me involves lots of exciting work! I still go to school, so there’s school and then I go to the dance studio and train for a few hours and then I either go to a vocal lesson or come home and practice some singing. Then I get some other homework done and work until midnight and then get ready for the next day. I completely devoted to my work and it’s like a hobby to me because it’s what I love to do.

JM: Do you ever take a break!?

VD: I really push myself the most so it’s usually my parents saying, “Victoria why don’t you relax for a little bit. Watch a movie!”. So I do take some time. It’s important to take a breath and then go hard again the next day.

JM: When you’re not singing/dancing/acting what would we find you doing?

VD: I’m usually hanging out with my girlfriends because we always have lots to talk about! Sometimes we’ll go see a movie or hangout and play games.

JM: When you’re back home in British Columbia what’s it like going to school and being a teenager who has a record deal and has experienced so much the past few years?

VD: I have so much great support from all my friends and school. It’s been really great so far with everyone’s encouragement and helping me through it. I’m very thankful.

JM: What can we look forward to hearing from you on your album?

VD: We’re still working on some singles to be released right now so I’ve been doing lots of recording lately. I have some more great dance songs in the works though. So look forward to some more awesome pop songs to come!

JM: So what’s next for Victoria Duffield?

VD: Well I’ve got a live show this Sunday on The Next Star finale at Canada’s Wonderland, I’m one of the headlining acts which is exciting. I have rehearsal tonight with eight back-up dancers. I’m looking forward to more live performances though coming up and writing more songs.

Writer at Live in Limbo.