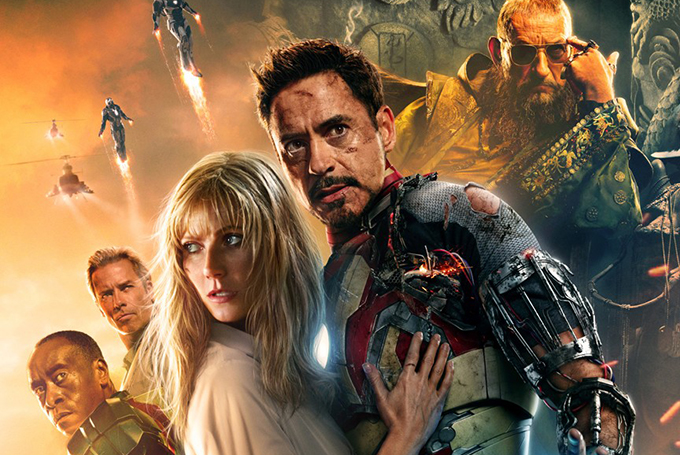 Let’s all be honest here, Robert Downey Jr’s performance as Tony Stark over the last few years has arguably been the biggest impact, next to Christopher Nolan’s Dark Knight trilogy, on the revitalization of super hero movies in recent years.

Iron Man was awesome, Iron Man 2 was a little less awesome but still a lot of fun, and then of course last summer’s main attraction, The Avengers had firmly reestablished that the super hero genre was possibly at its all time high.

So where do you go from there? The world obviously wants more of Robert Downey Jr’s Iron Man, but once a franchise has reached the pinnacle where else is there to go? We all saw the Iron Man 3 trailers and were all excited to see a bajillion Iron Man suits in action, but I personally had a lingering concern that the franchise would take a dip into spectacle over substance.

Well, Iron Man 3 delivers the spectacle, but also found a way to not go light on the substance as well.

Plot
Tony is haunted by memories of New York and the closing moments of The Avengers. Yes, Tony Stark is haunted by something. While Tony deals with inner demons, a new threat makes itself known, in the form of eastern terrorist leader, The Mandarin. Tony faces attack on all levels, physically, mentally, emotionally and even spiritually as he comes closer to the breaking point than we’ve ever seen him before, constantly teasing the Tony Stark: The Drunk Years story arc. Stark is a man literally being forced to endure his world crumbling around him and while it builds up a great conflict, it also adds a more human element to the story.

Cast
Calling a spade a spade, Iron Man is still the Robert Downey Jr show, but I’ll touch on that in a moment. Supporting him is still, arguably, the best cast in a Marvel franchise to date, with a myriad of three dimensional, well-rounded characters that the viewer truly feels a level of attachment to; there were several moments, and one specifically, where many of the audience actually sat up and said “what??” “no.” and “that can’t happen to them.”. Powerful character developments and establishments have left this franchise with some of the most loveable and memorable characters we’ll see in a long time in a super hero franchise… not that Andrew Garfield doesn’t stand a good chance in his Spider Man portrayal.

Now, on to Robert Downey Jr. Naturally he brings his charm, charisma and quick-witted quibs to the screen once again as larger-than-life personality, Tony Stark, but the character has been expanded on and it’s for the better. We’ve seen Tony in some tight spots and moments of contemplation before, but here we see Tony pushed further than we’ve ever seen, and Downey’s portrayal of a Tony Stark who can be anxious, frightened and desperate is a very stand-out change from the wise-cracking Stark we’ve grown used to. Again, he makes his snarky remarks, he’s just balanced it out with a true human element that sets Tony apart even more from the other Avengers who are, let’s face it here people, fairly bland by comparison. Adding to the personality aspect of Tony is also a showcase that Tony Stark is a hero even without the suit, as a scene midway through the film, where Tony infiltrates a compound with just a black hoodie, sunglasses and a few gizmos, raises Tony up on the pedestal and proves that he is the hero, with or without the armour.

Visuals
There’s just something about a couple hundred Iron Man suits flying around doing battle with an equal-sized army of super soldiers that makes you think “this is the summit, they can’t top this”. The computer generated imagery, whether it be the plethora of Iron Man suits or environmental effects are all seamlessly integrated into the real world. During a large destructive scene, you believe that the world is falling apart around Tony, while the suits themselves move around in the real world like they belong there.

Sound
Surprisingly the soundtrack wasn’t filled to the brim with Iron Man’s standard issue library of ACDC tunes. Instead the music now composes primarily of sweeping orchestra pieces and updated, grindhouse style anthems that pay homage to the theme songs from the 60s and 70s cartoons.

Foley work here is also done to the caliber one would expect of this franchise. The world feels and sounds alive, little audio nuances to booming explosions, everything feels in its place.

What I Liked
I loved that Tony was explored more in-depth, where they scratched the surface in Iron Man 2, Iron Man 3 shows the haunted Tony Stark who battles with his inner demons that has become so commonplace in the comics. The stakes felt higher, where Iron Man and Iron Man 2 had standard-issue villain conflict, this time around it got taken to a higher level, for the first time it genuinely felt like Stark’s back was to the wall and that he wasn’t getting out of this one with the full-course happy ending. The infiltration scene when Tony is without armour, just bad ass. The after-credits scene, it wasn’t some cliffhanger to another film, it was just a plausible (as possible) scene between two super heroes in an every day situation, and it was great.

What I Would Change
I felt a little disappointed when The Mandarin arc reached it’s full rotation, it was clever and entertaining but left a small degree of disappointment. Going The Iron Patriot route but with no references to Norman Osbourne also left me feeling a little gypped.

Final Thoughts
This is Downey giving us what we want but adding in new elements to keep the character fresh and exciting. This is Iron Man’s opus. The movie ends without clarity as to whether Stark has hung up his armour or if he will, in fact, return as Iron Man, but if this is the end of Iron Man’s run, it was a damn good one and will end at its finest. Tony’s closing narration does acknowledge that maybe the story’s been wrapped up with too nice of a big bow on it, but that he will always be Iron Man. This film was what a super hero movie should be: beautifully written narrative, strong characters, a little bit of cheese to remind you this is a movie about comic books, and a perfect blend of style and substance.