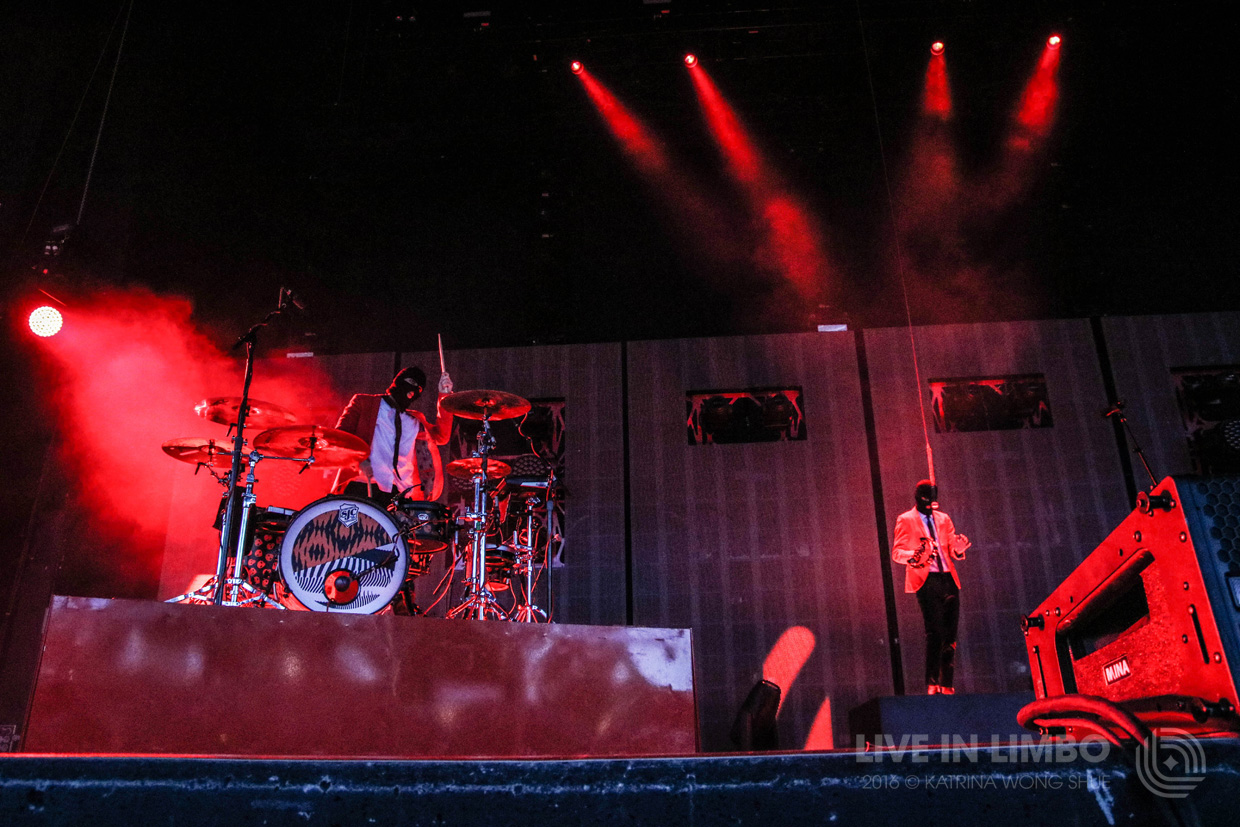 On Tuesday night, Twenty One Pilots, played a sold out Toronto show, their sixth stop on the ‘Emotional Roadshow’ tour that will bring them around the world over the next year. Even 40 minutes after doors opened to the public, a line snaked well beyond the Molson Amphitheatre entrance, across a bridge, and into the adjacent parking lot. People wanted to be there early – so early, in fact, that the queue started forming a whopping 54 hours before the festivities even began.

Twenty One Pilots’ fans, affectionately referred to as the “clique”, are staunch in their dedication for the band. Red beanies, black balaclavas, and distinctive makeup – red smudged eyeshadow and black neck and hand paint – adorned the crowd. A trip to the merch booth is top priority for many upon entrance, as popular items sell out instantly; I doubt I’ve ever seen such a high concentration of people wearing a single artist’s apparel. Meanwhile, diehard fans scoured the venue, distributing homemade posters to absolute strangers, and the Toronto Clique Twitter account – yes, they even have their own social media identity – is a flurry of impassioned activity. This is a band that people are emotionally invested in, and one can’t help but feed off the collective excitement.

Before the evening’s featured musicians took the stage, two very special artists helped warm up the crowd. First, Twenty One Pilots’ labelmates, Chef’Special, whose set marked their debut Canadian performance. While back in Holland the band garners mainstage status and regular airplay, the evening’s crowd were largely unfamiliar with the Dutch band’s ska tinged alt-pop. Despite this, appreciative cheers and hand bops appeared throughout the 20 minute set, which concluded with the sweet and poppy ballad, ‘In Your Arms’.

Next up, were intelligent modern rockers, MUTEMATH, whose set began with drummer, Darren King’s ritual of duct-taping headphones onto his ears. Bars of coloured light filled the stage as the band played selections from their four album discography, including current single ‘Used To’, and older tunes such as ‘Blood Pressure’, ‘Reset’, ‘Typical’, ‘Spotlight’. They concluded their set with ‘Monument’, the first single off their latest album, ‘Vitals’, but changed things up by performing the Disero Remix of the shimmery tune. A percussion-heavy outro, featuring illuminated white vessels, light-up percussion pads distributed amongst the front row, and a three-man assault on a single drum kit brought the set to a memorable close. “MUTEMATH is one of our favourite bands,” Tyler Joseph shared with the crowd, later in the evening, “the fact that we get to play with them every night is pretty much a dream.” With their intricate percussion-driven sound, genre defying tunes, and on-stage performance antics, it’s easy to see the influence the New Orleans quartet has had on Twenty One Pilots.

Finally, to a chorus of shrill screams, vocalist/pianist/ukulele player, Tyler Joseph and drummer/trumpeter, Josh Dun, known collectively as Twenty Pilots, arrived on stage clad in red suit jackets, black ties, and their signature balaclavas. Tyler stood atop his upright piano, a microphone suspended from the stage ceiling, as the driving rhythm of “Heavydirtysoul” opened the set. Afterward, Tyler offered the microphone to the crowd, who wholeheartedly sang the first verse of “Migraine” unassisted.

Oftentimes, especially at shows featuring newer artists, the majority of the crowd is only familiar with a headful of singles, opting to respectfully bob their head or sit down for the remainder of the evening. From the opening note, to the duo’s final bow, the Molson Amphitheatre stood in attention for Twenty One Pilots. A constant echo filled the venue, as the crowd sang along to every single word of every single song – from the band’s recent Billboard charting singles, ‘Stressed Out’ and ‘Tear In My Heart’, to lesser known tunes such as ‘Addict With A Pen’ and ‘Forest’ from their 2011 self-released album, ‘Regional at Best’. Every fist pump, every double-armed sway, and every singalong that Tyler conducted the audience into received near 100% participation from the giddy crowd.

During the latter half of the evening, the band invited openers Chef’Special and MUTEMATH back on stage for a jam session that included snippets of The Beatles’ ‘Twist and Shout’, Titanic ballad ‘My Heart Will Go On’, Justin Bieber’s ‘Love Yourself’, and House of Pain’s ‘Jump Around’. Other highlights of the evening included ‘Car Radio’, whose introspective spoken rap verses became a chant amongst the crowd and culminated in a powerful climax, and the band relocating to the 300s section – complete with drumset, upright piano, and even C02 cannons – for ‘Ode to Sleep’.

Pre-taped visuals, and eerie disembodied voices helped further the “Blurryface” narrative – that of a character acknowledging and facing their own insecurities – a universal story that resonated especially well with the predominantly teenage crowd. The show felt very much like a stage performance rather than just a concert, with a level of thought and production uncommon for indie rock performances – a genre in which authenticity is highly valued.

The evening concluded with ‘Trees’, a song from 2013’s ‘Vessel’, that was never released as a single, but holds obvious significance to the band. “We were worried that if a song were to get so big, then our true friends wouldn’t want to be friends with us anymore,” Joseph confided in the crowd, “thank you so much for supporting us and making us feel like we’re doing something worthwhile.” ‘Trees’ is a simple song whose power lies in its emotion-wrought delivery. As the song came to a close, Joseph and Dun returned to the front of the stage just to stare out into the screaming crowd, brimming with pure appreciation.

‘Emotional Roadshow’, is a perfect title for Twenty One Pilots’ 106-date jaunt around the world. The ‘Roadshow’ is the spectacle: prerecorded videos, costume changes, background dancers clad in radiation safety suits, coordinated drum routines, backflips, and all the other little details that visually stimulate the crowd. But at the heart of their performance is the ‘Emotional’ aspect – songs that rally affectivity out of you, impassioned performance, and the excitement of the crowd itself. Twenty One Pilots have perfected the line between authenticity and showmanship, and the result is immersive, empowering, and absolutely stunning.

Katrina is a writer and photographer at Live in Limbo. You can follow her musical adventures at @thekatalysts.