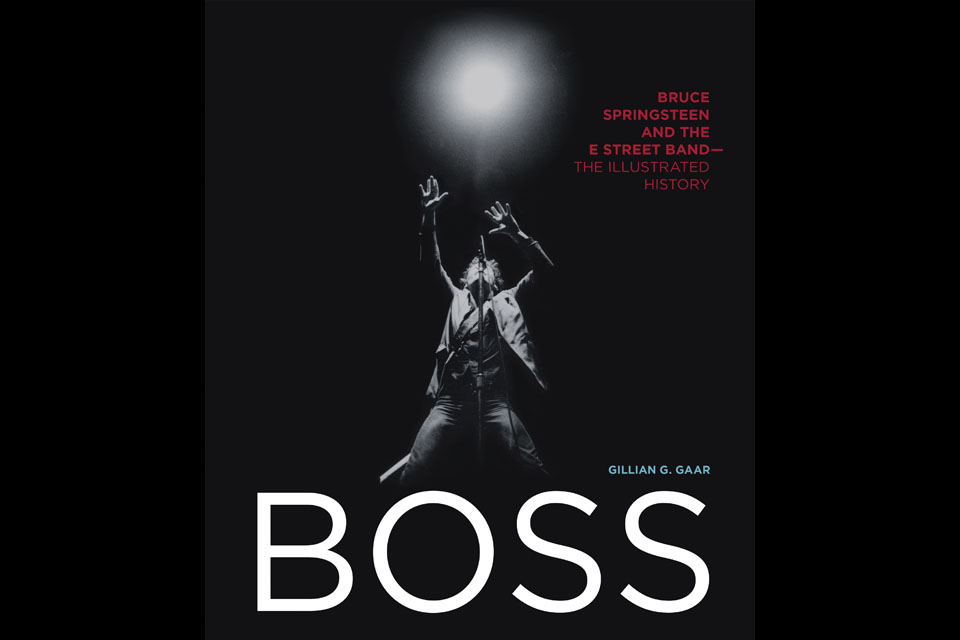 When you think about it, Bruce Springsteen is kind of the person you want a rock star to be. He’s been making music for a good 45 years now and still seems as earnest and passionate as he’s always been. He’s never said anything especially regrettable on stage, mostly stayed out of the tabloids and avoided any kind of substance abuse. And, more to the point, he plays rock the way it’s supposed to be: loud, brash and exciting.

This fall, Springsteen’s in the media as much as he’s been in years thanks to a new memoir, a career-spanning compilation and the recently released The River box set, not to mention a tour that’s taken him across the world. He also turned 66 on the 23rd.

Springsteen’s also the subject of Gillian G Gaar’s (who’s written for Mojo, Rolling Stone and a monograph on Nirvana’s In Utero) new large-format book, Boss: Bruce Springsteen and the E Street Band- the Illustrated History. Her book’s a concise history of Springsteen and his music, packed with pictures and digressions on his back catalogue. It’s an interesting read for fans.

Springsteen rocketed to fame on 1975’s Born to Run, but even the average fan of his knows it was hardly a debut record: he’d already released two records on Columbia. But what’s less remembered is how long he’d been a working musician by then. As Gaar’s book makes clear, by 1975 he’d been in the industry for almost a decade.

Born in 1949, Springsteen didn’t come from a musical family. His dad worked in a factory, his mom was a secretary and when Bruce practiced guitar as a teen, his dad used to pound the ceiling with a broom to get him to quiet down. By 1965, he was playing in bands around New Jersey and working his way up the ladder. Gaar covers these bands in detail: garage band The Castiles, hard-rocking Earth and the genre-stepping group Steel Mill. As Gaar notes, between these groups and solo appearances on the coffeehouse circuit, Springsteen quickly made a name for himself. He was even invited to play Woodstock (Steel Mill played a better-paying gig in Jersey instead). After a drug bust, the band’s days were numbered. In early 1971, they broke up and Springsteen went solo.

These are all years Gaar covers in some detail, tracing his career from garage bands to established solo act. And even then, it wasn’t especially quick: after two two-charting albums and a few tours opening for other bands, Springsteen needed to land a hit to keep his career going. He had it with Born to Run. Writes Gaar:

“It came almost two years after the release of The Wild, The Innocent and the E Street Shuffle, but it was worth the wait – it was the breakthrough album Springsteen had been waiting for… Springsteen had made it. When he arrived in Red Bank, New Jersey, for an October 10 show at Monmouth Arts Center, the marquee simply read: ‘The Homecoming.” (pg 55)

From there, Gaar’s book largely covers ground most fans are familiar with: the lawsuits that kept Darkness on the Edge of Town from being recorded until 1977, stark solo records like The Ghost of Tom Joad and Nebraska and the world-wide smash success of Born in the USA. She covers it all, from President Reagan misunderstanding “Born in the USA” as a patriotic anthem to his marriage to singer Patti Scialfa to the breakup with – and many reunion tours with – the E Street Band.

There are interesting diversions along the way. Gaar relates a story of Springsteen running into fan at a movie and going home with them for dinner, for example. There are others: he pops into a club and jams with a local band, writes songs for artists like Warren Zevon and Patti Smith or plays the Super Bowl’s halftime show. His love for playing live, no matter the venue, comes through in this book.

At the same time, she never shies away from writing about Springsteen’s more polarizing, political side. I’d remembered he’d written a song about police brutality – “American Skin (41 Shots)” – but I’d forgotten how angry it made some New York cops. Likewise, Gaar devotes a short section to his 1994 single “Streets of Philadelphia,” a stark and powerful single about a man dying of AIDS. More recently – so recent it wasn’t included in her book – he cancelled a show in North Carolina over it’s discriminatory HB2 “bathroom bill.”

While there might not be much new here for fans, it’s still an interesting read since it takes the time to go into the dustier corners of Springsteen’s career. It would’ve been easy to write a more conservative, by-the-numbers book and to her credit, Gaar doesn’t do that, which keeps her book interesting, even for people who’ve already been converted.

A final note: there are plenty of photos from over the years, but the two with really stand out for me are juxtaposed on the inside cover: one’s from the mid 80s, the other from a more recent show. Both show Springsteen in full flight, guitar in hand, looking remarkable similar. Indeed, he’s 66 now, but still hitting the road for massive, three-hour shows. The more things change…