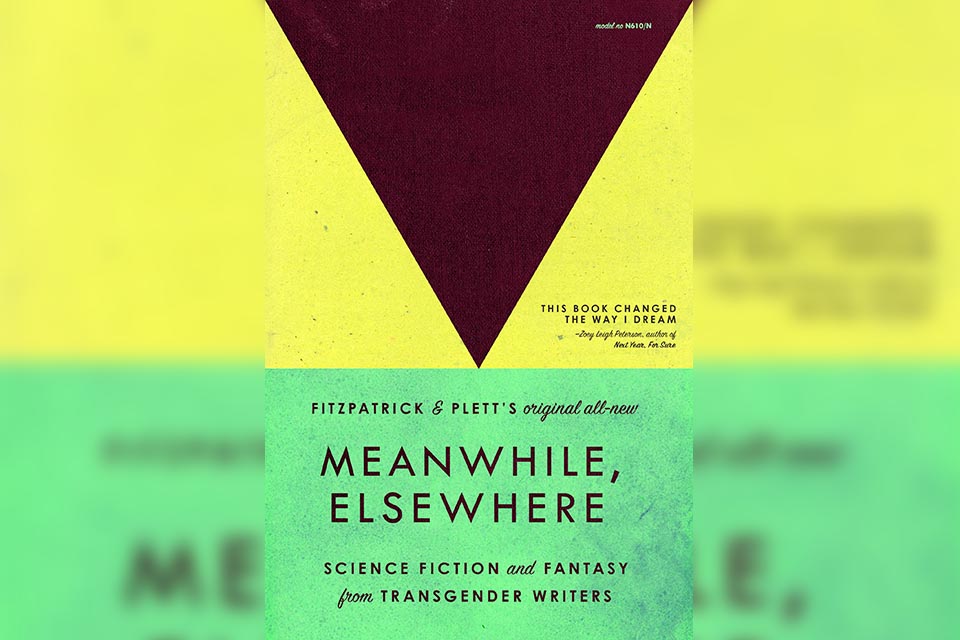 “Science fiction is metaphor,” wrote Ursula K Le Guin, “what sets it apart from older forms of fiction seems to be it’s use of new metaphors.” Meanwhile, Elsewhere is packed with these kinds of new metaphors, which makes it a valuable collection for any bookshelf. And, more to the point, it’s also a lot of fun.

Let’s drop back for a second. Topside Press, the publishing house for Meanwhile, launched in 2012 with The Collection, an anthology of 28 trans writers. Since then, several have had their own works published there, including Casey Plett’s A Safe Girl to Love, for example.

Both Plett and Cat Fitzpatrick have co-edited Meanwhile, Elsewhere, a new anthology which features 25 short stories by trans writers. Here, established writers are mixed alongside new, young talent, placing this work in a context where author Imogen Binnie is both named in a story and has a story of her own included. Some other names you may recognize: Jeanne Thornton, Trish Selah, and Sybil Lamb, among others.

The beauty of a large anthology comes in the diversity of the talent included. And there’s a lot of different voices in Meanwhile, Elsewhere. It’s just as rewarding to sit down with this book and read a few of the stories in succession as it is to pick and read them individually, letting each of them breathe.

The stories range the gamut from post-apocalyptic sci-fi to straight-up fantasy: witches and demons on the fringes of today’s society. More than a few have stuck with me since reading.

My favourite of the collection was Cooper Lee Bombardier’s “After the Big One.” Here, the reader follows a group of quarrelling young adults as they flee into the deep forest from a massive earthquake. Without their realizing it at first, they become a family, almost in spite of themselves, learning to care for and protect each other. It’s a well crafted, moving story, with a great payoff.

Other stories go deeper into the sci-fi and fantasy realms. Paige Bryony’s story “Control Shift Down” follows sex workers as they move into a wholly digital world; Brendan Williams-Childs’ “Schwaberow, Ohio” has a presidential candidate married to a robot and the rural prejudice it stirs up. Emma Addams’ “Thieves and Lovers” gives pre-code noir flicks a slick, futuristic twist. And Lamb’s story follows a group of people in a drug-filled, cyberpunk wasteland where everyone doesn’t just have computers built into their head, but they go and watch noise-punk bands clash in nightclubs; her story gives new meaning to Battle of the Bands.

Meanwhile, Calvin Gimpelevich’s story “Rent, Don’t Sell” has the novel twist of a gym where a trainer swaps bodies with clients, allowing you to work out, without actually doing anything. But Gimpelevich takes the conceit a little deeper, with trans people switching bodies, sex workers renting theirs out and a protagonist struggling with PTSD issues that seem ripped from tomorrow’s headlines. It’s a gritty, dark story, pointed in the same way the best noir stories are.

If, as Le Guin wrote over 40 years ago, sci-fi and speculative fiction are metaphors, Meanwhere, Elsewhere is packed with them: metaphors for gender roles, expression and identity.

But like the best of science fiction, the stories here are entertaining even as they make their points: there’s no moralizing here. Sure, they’re rewarding on second or third read, but just about everything here is fun even on the first. And wither you sit down with them all at once, or pick and choose a story at a time, there’s a lot to enjoy here. Topside’s currently selling the book in a variety of formats and packages, too. Recommended.