Blink-182 with Anti-Flag, Dashboard Confessional, and more at Riotfest 2019 Day 1 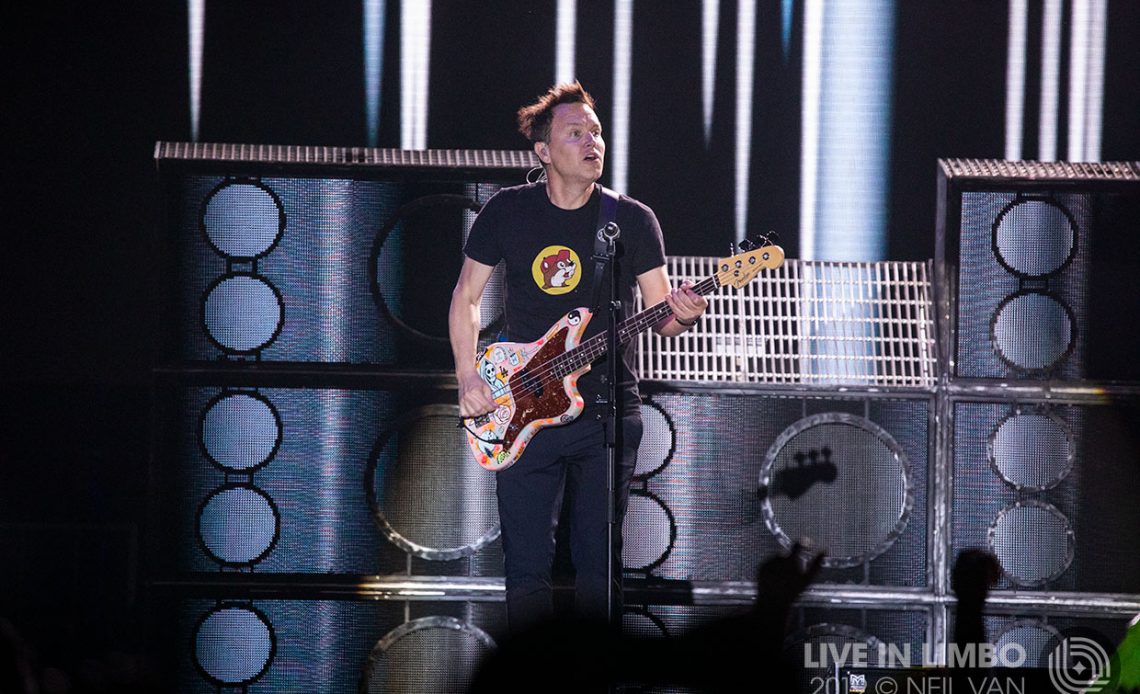 I had the opportunity to attend the 15th anniversary of Riot Fest this year, and what remains a common theme from attending the festival both in Toronto (R.I.P.) and Chicago is the diversity. The breadth of acts booked ranges across the board in genre and brings out an interesting but almost universally accepting crowd, providing a truly unique experience. This year was no different, with the crowd ranging from the hardcore punks to the casual observer lost in a sea of band t-shirts. Originally starting as a punk festival, it has evolved to be more inclusive of different sounds while still staying true to its roots, with reunion shows, final appearances, and shining a spotlight on up-and-comers. Another festival tradition that started in 2014 are full album plays coinciding with release year anniversaries, with this year’s festival goers gifted a number of them including Against Me! playing 2 full album sets.

Organizers again set up in Douglas Park, offering a wide variety of carnival attractions (ie. the infamous Ferris wheel and Butter John Stamos) and a smorgasbord of musical offerings spread between five well-placed stages. However, the sheer number of bands and set overlap throughout the weekend led to some serious missions across the grounds in order to catch a little bit of everything you might want to see. There were excellent food options available, but the majority of them were a bit of a walk away from any of the stages, and by the early evening lines reached epic proportions.

Getting to Douglas Park shortly after doors opened was a bit of a trek, but worth it to see up-and-coming bands and get the lay of the land. The sound was definitely one of the conversation topics on the first day, as a combination of high winds and lower volumes at the two main stages (Riot and Roots) really impacted the quality of performance by any band playing there. One of the things you have to appreciate about this festival is how early people are willing to make it to Douglas Park. This was apparent with Toronto-locals Pkew Pkew Pkew, who kicked things off bright and early for an already sizable crowd, gaining new fans with their pop-punk set.

Anti-Flag played in front of a large and enthusiastic crowd, really getting them going when they gave speeches against bigotry, homophobia, and other forms of social injustice. Their politically-charged songs both new and old resonate now more than ever. One of the standouts from their set was the game of UNO that happened in the pit. Yes, the card game – it got it’s own Facebook event page and everything!

Senses Fail treated the crowd to a rackus set complete with a thrilling medley of cover songs halfway through their set (including SOAD’s ‘Chop Suey’ and RATM’s ‘Bulls on Parade’) on top of a full album play of Let it Enfold You. Their energy was hard to ignore and if fans couldn’t get enough, the band would play their E.P. From the Depths of Dreams the following day.

The Violent Femmes graced the crowd with a wonderfully eclectic and mostly acoustic surfer-rock set that sounded just as good live as on the radio. They led the crowd in feel-good grooving for more well known singles like “Blister in the Sun”, “Prove My Love” and “Gone Daddy Gone” as well as doing an interesting take on “God Bless America”, impressing everyone with their sheer musicality and use of conventional and non-conventional instruments. At one point the sounds of a charcoal BBQ and conch shell accompanied the horn section complete with a 6 ft bass saxophone in a wonderful mix of ingenuity and quirkiness.

Emo fans were rewarded with the sweet sounds of Dashboard Confessional, though at times the sound was inconsistent at best. The volume was so low at times that depending where in the crowd you stood neighbouring conversations seemed louder than the band on stage. Nevertheless, when Chris Carrabba launched into 2001’s The Places You Have Come to Fear the Most, the entire crowd perked up and began to sing along, belting out tunes like “VIndicated” and closing on a high point with “Hands Down”.

Playing at the same time as the Flaming Lips, Rancid performed a great set to a large crowd of their diehard fans. Incorporating songs from across their catalogue of work (but more so from their album…And Out Come the Wolves), the band engaged with the audience, urging them to clap, sing and dance along to fan favourites like “Roots Radicals” and “Time Bomb.” However, it was difficult to ignore the psychedelic spectacle across the field.

The Flaming Lips beckoned viewers with a gorgeous kaleidoscope of trippy colours and impressive stage visuals including a giant inflatable robot. Wayne Coyne is a consummate frontman, with blissful vocals and seeming to float above the audience in a giant ball. Their set included an album play of Yoshimi Battles the Pink Robots (which was cut a couple songs short most likely due to time constraints), and led the crowd to sway in pure happiness while closing with “Do You Realize??”.

After cancelling their appearance at last year’s Riot Fest, it was clear blink-182 were ready to bring the noise. Unfortunately, their set suffered from poor sound that failed to travel as far as the massive crowd was stretched out. That being said, you could not tell based on how enthusiastically their fans greeted them, singing along for the entirety of the Enema of The State album play with gleeful abandon. The nostalgia was very real and easy to get caught up in, demonstrating the album resonated with so many people for whom it was a soundtrack to their youth. Everyone was in top form, with Matt Skiba finding his place in the band, and Mark Hoppus and Travis Barker playing with the same tenacity as when Enema first came out 20 years ago. They closed out the night on a high point while paying tribute to the Descendants, sending the masses out of the park still boisterously singing their tunes.