Not even 48 hours after the scrappy Governor’s Ball dropped their lineup, their rich new neighbor from across town that has a totally rich uncle in California released theirs hoping to compete for dollars of New York’s festival going crowd. With their deep pockets and less than ideal location (Randall’s Island is really just a big open flat park) Panorama pulled a rabbit out of their hats. Much like last year’s first iteration of the fest, the poster is extremely top heavy with a who’s who of performers that slowly devolves into an evening of homework to learn the new names. Last year only 3 names topped the poster and the top acts all played unopposed. This year, each top line features two names possibly going to force customers to pick what big names they want to see, which is either a bold brilliant strategy to get more people out or will cause the acts to cannibalize each other.

Leading the way on the Friday is newly minted headliner Frank Ocean who will get the crowd swooning as they hear from him for the first time in year’s as he plays his new material finally. Opening or opposing him is Solange who quietly put out a vastly superior album to her sister (who happens to be headlining Coachella, the sister fest of Panorama). A double dose of modern RnB is a sure fire way to get the crowd grooving.

On the Saturday you have Tame Impala, which is a shock to see since Kevin Parker claimed last year that the band was going on hiatus for a while. Unless hiatus means only six months this could very well be a one off show, although Parker is doing a DJ set at Gov Ball with Mark Ronson. The other top name is Alt-J, which must mean that their long awaited follow up to 2014’s This Is All Yours is finally coming soon. After putting out one of the most inventive new rock albums with An Awesome Wave in 2012, they took a step back critically but hopefully they regain their step.

Finally, on Sunday is 90’s reunion night as Nine Inch Nails leads the charge as they prepare to release a new album this year. The Industrial rockers put out a new track and have been wowing crowds with their live shows for years now. Make no mistake this booking is in retaliation of Gov Ball booking another 90’s hard rocking act in Tool. The other big name is A Tribe Called Quest, who put out the best Hip-Hop album of last year. Sadly, with the passing of Phife Dawg the group will mostly like have plenty of their friends come and join them on stage like Busta Rhymes, Consequence, Talib Kweli and others. So far this is the only announced show but expect more as Q-Tip has promised a world tour.

While Gov Ball seems to be positioning themselves as the premiere Hip-Hop festival, Panorama is not slouching off in that regard either. Joining ATCQ will be Tyler the Creator who brings legions of fans everywhere he goes. Kendrick Lamar protégé Isaiah Rashad looks to make a name for himself while Vince Staples continues his ascent as one of the best in the game. Chance the Rapper cohort NONAME who quietly put out an amazing debut album last year looks become a name and for an electronic twist DJ Shadow will get the Hip-Hop heads grooving.

While Gov Ball almost completely ignored Electronic music, Panorama managed to book the best non-bro EDM acts touring. The two big names are French duo Justice with their oversized sound and mash up king Girl Talk. The artist formerly known as Chet Faker gets high billing under his own name, Nick Murphy, and the other ‘Nick’ Nicolas Jaar will bring the brooding. Kanye approved producer Cashmere Cat will get the crowd bumping and Stranger Things composers S U R V I V E will bring back the sound of the 80’s.

New York has long produced some of the best Rock and Indie acts, and it makes perfect sense that some of the biggest and most promising Indie acts appear here at Panorama. With their expected fifth album to come this year superstars in the making Future Islands will prowl the stage. The other massive Indie act is Spoon, who make such straight forward Indie Rock that it almost seems impossible just how much talent their punch contains. Last year was a huge year for Mitski, who draws comparisons to Courtney Barnett, Emo-Punks Pinegrove will make the short journey from New Jersey to play and another guitar rocking chick Angel Olsen will impress the crowds. Canucks Preoccupations (formerly known as Viet Cong) look to continue winning over fans one show at a time, Emo king Andrew McMahon will play a solo show after fronting acts like Jack’s Mannequin and Something Corporate. Cloud Nothings will play in support of their soon to be released album (that comes out this month) and hidden way down on the poster is Dhani Harrison son of former Beatle George.

Lots of festivals that occur on the same weekend will inevitably end up sharing acts like Lollapalooza and Osheaga, and Panorama will be on the same weekend as Wayhome for the second year in a row. Last year fifteen acts were shared between both festivals including two headliners (Arcade Fire and LCD Sounsystem) so those of us in Ontario can’t help but stare at the lineup and wonder what crossover acts we will be getting. You can probably easily eliminate up to ten names as potential acts since they have played Wayhome in the last two years, but that still leaves plenty to hope for! This festival might contain the best top line yet of the year, but unless you are intimately familiar with the bottom two lines per day, you will most likely end up having a ton of conflicts in the second half of each day. 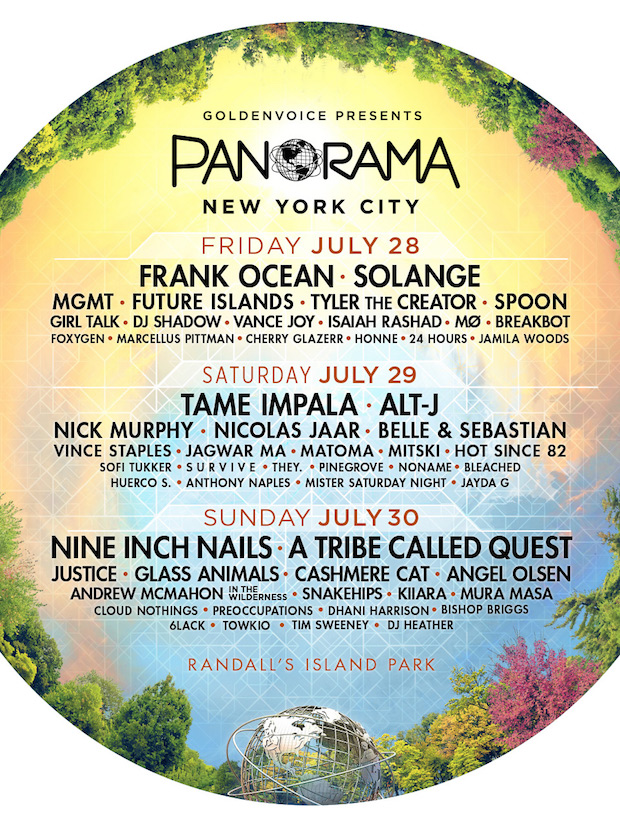