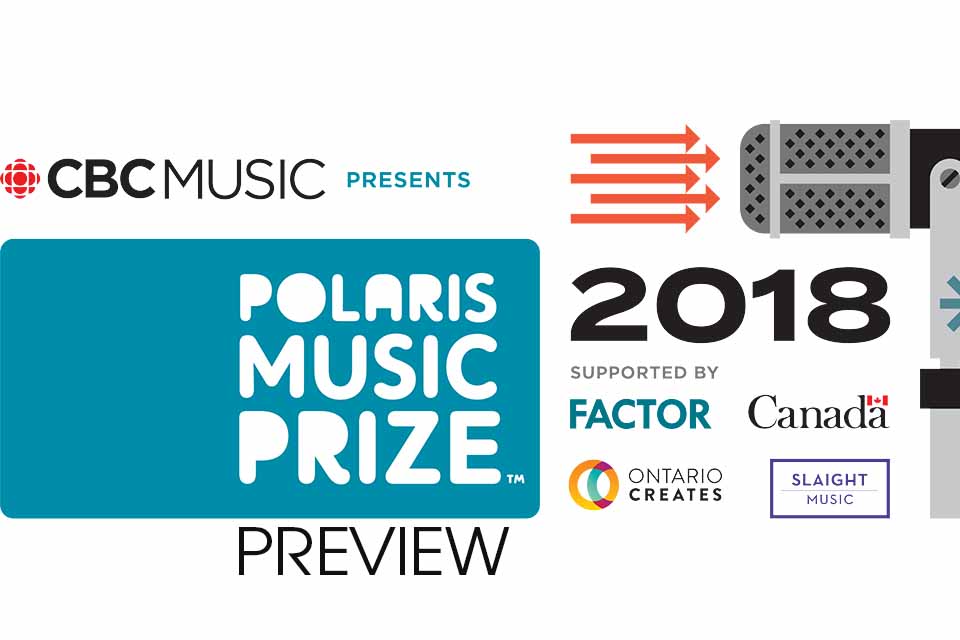 In my five previous years of covering the Polaris Music Prize I have learned a lot about Canadian music, the industry and some really great artists. I have learned so much in fact about these awards I can tell you what is going to happen Monday night at The Carlu when they crown a winner for 2017-2018 and that is I have no idea who will win. I am routinely wrong in not only predicting who will win, but who the real contenders even are. Most of the time my own personal ballot runs counter to who actually wins, proving you know nothing about music no matter how much you listen to.

This year’s group of nominees are the most musically diverse I have ever seen. There are three artists who perform in languages other than English with Pierre Kwenders (English, French, Lingala and Tshiluba), Hubert Lenoir (French) and Jeremy Dutcher (Wolastoq) showing great diversity in our landscape, which follow in the footsteps of last year’s winner Lido Pimienta who’s album was in Spanish. There is also a fully instrumental classical album with Jean-Michel Blais who hails from Quebec adding more diversity to the usually Anglophone sphere of the award. Despite performing in English the duo Snotty Nose Rez Kids (along with Dutcher) bring Indigenous representation to the front following in recent years of winner’s Tanya Tagaq and Buffy Sainte-Marie and nominees A Tribe Called Red continue the renaissance of excellent First Nations music being produced in a multitude of genres.

Speaking of genres the breakdowns are all over the place showing what makes the Canadian music scene so special. Dutcher sings opera against a modern classical backdrop, Blais is straight forward classical music with a touch of Brian Eno-esque ambient, Daniel Caesar fuses RnB with rock and pop, Alvvays is leading the twee-pop movement across the world, Kwenders creates his own style of music blending world pop with hip-hop and electronic beats while Partner throws in a dash of pop-punk to the group. There usually is some overlap in genres but these ten nominees seem as varied and different then there ever has been in the Polaris’ history.

Every year I conduct an informal jury pool asking contributors to the site and trusted music lovers to weigh in. They listen to all ten records then rank them from best to least best (since none of them are ever bad). This poll is not to see who we think would win but just what we would vote for if we were actual jury members. I’d like to thank Sean Chin, Matt Forsythe, Katrina Lat, Gemma Mastroianni, Neloufer Perera, Gilles LeBlanc and Josh Weinberg for participating and providing their expert thoughts on the nominees.

Without further ado, here are our rankings with a bit of commentary for each album.

Why he will win: Breathing a giant breath of fresh air in the soul, RnB and rock genres coupled with his on deeply personal lyricism he posits himself as the Canadian Frank Ocean and people have been falling hard for this young singer wanting to crown him the top of the game in the country.

Why he won’t win: There has never been a RnB or soul album that has won and one wonders if there is a slight bias against the genres (there have been no hip-hop winners either with Kaytranda being the closest), he could be the first but that is so hard to judge by.

Chances to win: Medium to high, could be a dark horse spoiler

“This is dreamy soul music that makes you want to light candles and get close with someone you love – or want to love. It’s slow and steady. It’s sexy and current – while evoking a bygone time. It’s more complicated than it might appear.” – Neloufer

Why he won’t win: He doesn’t fit in any neat box and being the only pure Francophone artist may work against him as only Karkwa have won before him and he is up against some tough non-English works.

“If you put the glam rock of David Bowie’s early ‘70s output in a blender with generous helpings of Serge Gainsbourg, Motown soul and more saxophones than you can shake a stick at, you would get close to what Hubert Lenoir has accomplished with Darlène. Part post-modern opera, part chansons powerhouse; Lenoir’s star is just beginning to rise.” – Josh

Why they will win: Dominating radio with the dreamy singles this is the most popular record nominated this year giving jury members the most time to dissect and pour over the whimsical lyrics and catchy riffs moving it to the front of the pack.

Why they won’t win: It doesn’t quite measure up to the bands better debut album and that may hold them back as that previous record wasn’t good enough to win (unless the jury feels hell bent on correcting a mistake), the fact that it is also the poppiest record of the group may influence some voters against it.

“Dreams Tonite is one of my favourite songs of the year. It’s a great representation of the album, and gives you everything the title would put into your head just by reading it. This album is the perfect definition of dream pop.” – Gemma

Why he will win: Performing in a language spoken by only 600 people and resurrecting songs that haven’t been heard in generations is a fantastic story and contribution to the arts is a total win regardless of the outcome but his heartbreakingly beautiful voice carries everything over the mountains and the bottom of the ocean. He also follows the trend of two of the last three winners being First Nations people.

Why he won’t win: Classical and Opera are genres that has never even sniffed the finish line add on to the fact that jurors won’t understand what he is singing about let alone even be able to pronounce the album name or tracks may cause some hesitation.

“This album is simply breathtaking, and not just for the beautiful compositions. Not only is Dutcher keeping his language of Wolastoq alive for future generations through this project, but his vocal power shines through on every track.” – Josh

Why she will win: Meg Remy continues to push boundaries of what is considered “pop music” making it darker and more sinister while still adding elements of disco and synth grooves found on the radio. Her winking lyrics that can be read five ways from Sunday allows listener to imprint any view on her that they wish.

Why she won’t win: Despite some really high highs, some voters may think the record isn’t cohesive enough or anti-pop enough to be groundbreaking. If Carly Rae Jepsen couldn’t win will U.S. Girls pull it off?

“I wrongfully dismissed this as a disposable disco record when it’s so much more; so many moving parts make a dirty, groovy whole.” – Matt

Why they will win: Breaking the norms with his piano based music and no vocals allows the listener to just set back and enjoy the beautiful mood set by Blais. At times it is sparse and at times filled to the brim, this album has it all sonically.

Why they won’t win: While Godspeed You! Black Emperor won while having no vocals, they didn’t set much of a precedent. There also hasn’t been a classical or ambient winner so the deck is stacked against Blais for being a trailblazer here.

“I’ve been a fan of Jean-Michel for a while. It’s time perhaps for an instrumental album to win Polaris” – Sean

7. Partner- In Search of Lost Time

Why they will win: Their don’t give a crap attitude pop-punk is a throwback to when most jurors were getting into music gives a hard nostalgia feel not to mention they are really funny singing songs about how everyone knows when you go out of the house stoned. Their wit and in your face rock is hard to find irresistible.

Why they won’t win: They don’t tackle any serious issues and are out rocked by Weaves and aren’t cutting edge enough which might be enough factors to hold them back.

“Partner appeal to me as probably the most geetar-heavy band on this year’s shortlist, and with lead axewomen Josée Caron plus Lucy Niles, they’re definitely the most LGBTIQ-friendly artistes. Seriously, what’s not to love with them?” – Gilles

8. Pierre Kwenders- MAKANDA at the End of Space, the Beginning of Time

Why they will win: Throwing everything into the music pot from around the world is a record that shows what makes Canada so great and welcoming. His blend of traditional world beats with modern pop music is something unique and special that will turn a few heads and tap a few toes.

Why they won’t win: Being quite difficult to pin down genre wise makes it difficult to analyze what he brings to the table at times might hold him back.

“I hope the people behind Polaris Prize never lean far enough to the right or some conservative way of thinking that would prevent someone such as Pierre Kwenders from continuing to create art here with a worldly appeal.” – Gilles

Why they will win: Combining rap music with Indigenous politics is a recipe for success as they are both relatable everyday stories mixed with things we only see on the news. Drake has been nominated several times but his bougie work might have been too much, where the SNRK take hip-hop back to the basics getting listeners engaged and enraged.

Why they won’t win: With no rap winners, it is always hard to peg a route to win, they also face competition from Jeremy Dutcher for literally reviving a language from near death if voters want to honour First Nations music and some songs veer too far off the message losing the bite of the record.

“Rap and Hip Hop enveloping indigenous politics and naked truth-telling. It packs a lot in and makes you think, all while making your ears happy. It’s cool.” – Neloufer

Why they will win: They are the first back-to-back nominee since Drake did it in 2014-15 showing the larger jury selection team loves their music. They also joined Tanya Tagaq on stage last year to debut Scream from this album having a special place in Polaris’ hearts.

Why they won’t win: After not winning last year with a record that is similar enough to the new one, one wonders if they have done enough to separate themselves from the pack.

“Weaves have quickly gained a notoriety for blending noise pop with lo-fi punk aggression, something they chose to refine on Wide Open. Shades of arena rock, electronica, and some moments that lean more acoustic allow for Jasmyn’s lyrics to really take hold” – Josh

Make sure you follow @LiveinLimbo on Twitter for live tweets during Monday nights show and a full recap to be provided by Sammy Feilchenfeld later this week!