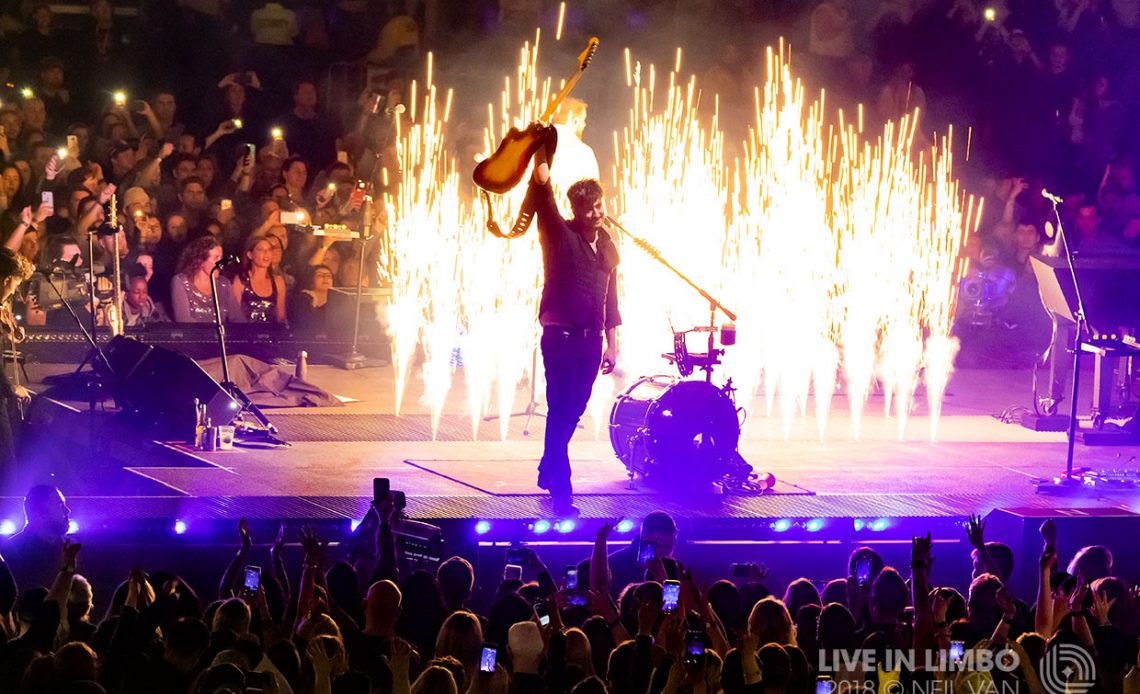 With Mumford & Sons latest release, Delta, that came out on November 16th the band is now two records deep into their full on electric phase. Just like Bob Dylan in 1965 who traded his acoustic guitar for a Strat, Mumford & Sons began their career revitalizing the folk genre in the pop world. Their first two records were smash hits that paved the way for acoustic guitars, banjos and stand up basses to be cool again. The set was unique but it wasn’t the first time I had seen a stage in the middle of the floor, or a band playing in the round. Looking like a giant boat sitting across the width of the floor surrounded by a sea of people on either side. Their energy and excitement seemed to make the stage sail with the raising and lowering of the lighting grid adding to the illusion. When the band came out lead singer Marcus Mumford told the crowd that “it doesn’t matter if you have a seat. You’re here for a good time” in reference to most of the crowd being in the bowl.

Early in the set, the band played their first major hit, Little Lion Man from their debut album Sigh No More. The song is still an absolute barnburner of a track despite most of the beat coming from a reverb heavy acoustic guitar and a kick drum. The crowd gleefully sung along to the explicit chorus, as the band would pause playing and singing to allow the ocean of voices to fill the void. The band all had wireless instruments so they didn’t need to worry about tripping over cords as the roamed over the large stage. With microphones set up every few feet, they could wander a bit then stop in front of a new mic in order to sing their next part allowing freedom not normally available to musicians. Along with the band having the lay of the land, there were always backing musicians lurking in the shadows like a violinist, drummer, keyboardist and a couple of horn players. They would come and go, as needed occasionally taking a more prominent placement on stage like for for solos. On Babel it was exciting to hear Mumford’s yelp in a way that only he can, despite the audience trying (and coming in too early en masse).

A master of many instruments, Mumford showed his prowess on the drums while simultaneously singing the lyrics for Lover of the Night. With Mumford stationed behind the drums it allowed Winston Marshall and Ted Dwane to occupy more of the deck and show their personalities. For Guiding Light, the first single off of their newest album, Delta, the band stood on four corners of the stage all singing to a different section of the crowd, ensuring everyone in the arena got a great show. Mumford dedicated Believe from Wilder Mind to the band’s fans who responded by lighting the entire arena with cell phone lights creating a beautiful star lit effect. When the screeching guitar came in sparks shot up around the stage, setting the template for more to come later on.

Mumford lavished praise on the city of Toronto and Canada as a whole several times saying things like “somehow your country has been the most welcome and kind to our band, and for that we thank you”. There was a woman against the railing who was wearing an AFC Wimbledon hat, that Mumford noticed and asked if she was a supporter of his favourite footy club or just wearing it to support the band. She confirmed it was just for Marcus Mumford, he thanked her and dedicated The Cave to his club form back home. The energy for the band kept increasing as the night went on with Dwane impressively rocking the stand up bass while holding it high above his head.

It isn’t unusual for a singer to walk through a crowd, or even up and down the aisles of a bigger venue, but Mumford took it a step further and walked between seats during Ditmas on the 200 level before making his way to the floor and having the crowd jump up and down around him as he bobbed his way to the front with a security guard acting as his safety raft. The band played a new song, Darkness
Visible, which had a long and slow electronic buildup before turning into a futuristic freak out jam session featuring plenty of bright red fireworks shooting up from the floor of the stage every few meters. The main set ended with The Wolf blaring loudly and proudly.

As the band returned for the encore all four members stood around an omnidirectional microphone to sing a quiet ballad version of Cold Arms off of Wilder Mind only accompanied by Mumford’s unplugged acoustic guitar. I’ve seen a few bands do something similar like The Lone Bellow and Grouplove and while the concept is great, performing in a giant arena with people that shout and holler during the quieter moments makes for a futile gesture at quiet togetherness unfortunately. Things picked right back up when tour opener Maggie Rogers came out to help sing Awake My Soul from the bands debut record. Before the band launched into I Will Wait, Mumford reassured the crowd that the band does not take their fans for granted as he lead a giant sing a long to possibly the band’s biggest hit. Things wound down with another new song, the title track from Delta. Mumford & Sons brought their fans on a voyage that explored the four corners of their career and everyone and their mates went along for the journey.